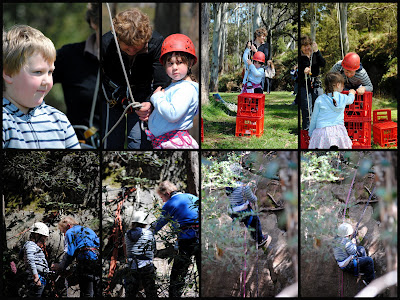 what an awesome day!! Our home ed group went out to the honeycomb caves which is inland from Deloraine. A spectacular spot that has a maze of underground waterways and caves that would rival any rabbit warren. Beren decided to try abseiling and gave it two attempts but decided about 2mtrs down that it wasn't for him. Braver than me cos I couldn't have done it at all. Heaps of kids did though and just as much fun was had 'crater climbing' too.

About half did some caving but again we opted out of that one as neither of the kids wanted to go without me and I was not up for it I am afraid!

The views from here were beautiful as it is at the foothills of the Great Western Tiers, we even spotted a small amount of snow on the western end of the tiers when we were driving up.  Mind you the day was glorious and about 22degrees.  Just perfect! 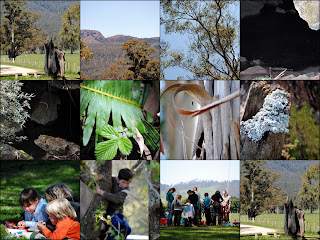 okay, not exactly wordless wednesday here but see some more that might have less chatter here LOL

Bought to you by Kelli at 20:32 Labels: home ed, kids, meme, wordless wednesday

The kids look like having a lot of fun. My son would like to be one of them.

Kids look like they are having a great time, what fun.

Oh way cool! That looks like a beautiful spot and I bet there was much excitement and pride over the abseiling!

Thank you for taking the time to visit my blog. You can search or take a tour of my tags down below.
I have two other blogs you might like to visit. One for my photos called snapnshoot and the other for my genealogy wanderings called Kebeni-going home. I would love for you to visit me wherever I am :)
If you like what you see please share me by clicking on the share buttons at the bottom of the post and thank you in advance.

What I have been reading

How to Eat Fried Worms
by Thomas Rockwell
The Ultimate Book of Homeschooling Ideas the Ultimate Book of Homeschooling Ideas
by Linda Dobson
Amazing Origami
by Kunihiko Kasahara
The Rugmaker of Mazar-e-Sharif
by Najaf Mazari
The Kraken Wakes
by John Wyndham
All That I Am: A Novel
by Anna Funder
Now and Then: Greg Page
by Greg Page
Oatlands, A Colonial Treasure
by Walter Pridmore
Henry Reed: Van Diemen's Land Pioneer
by Wilmot Hudson Fysh
Our Heritage: A Brief History of the Church of Jesus Christ of Latter-day Saints
by The Church of Jesus Christ of Latter-day Saints
Dear Fatty
by Dawn French
Made to Play!: Handmade Toys and Crafts for Growing Imaginations
by Joel Henriques
Doodle Stitching: the motif collection
by Aimee Ray
Running With Scissors
by Augusten Burroughs
The Best of Times, the Worst of Times: Our Family's Journey with Bipolar
by Penelope Rowe